2015 to Bring Changes and Challenges to Domestic Energy Sector

The dawning of a new year traditionally brings hope, optimism and a list of resolutions each of which I share especially for the continued economic recovery nationwide. However within the domestic oil and gas sector which is serviced so effectively by hot shot trucking companies like ours, 2015 commences with a certain degree of uncertainty.

I think that there might be a degree of oversimplification about the downturn by some experts however as the acceleration of domestic energy production has helped to spur the economy in so many regions and the huge capital investment that goes with that won't be derailed by oil prices reaching their lowest point for over five years. Where oil prices will head in 2015 is currently speculative and it's interesting to note that Department of Mineral Resources Director Lynn Helms is optimistic about the sector calling the recent decline 'a blip'.

According to a recent article in Prairie Business, North Dakota views 2015 as a critical year for the industry due to a combination of different issues. I'm starting the year bouyed by optimism and feel that while changes lay ahead the overall health and growth of the sector will continue. However that doesn't dispel some of the challenges that are to come. 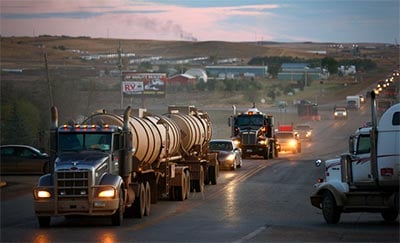 In North Dakota some new rules will have impact on natural gas production such as requirements to reduce the natural gas flared during extraction down to 23 percent next year and 15 percent the following year. The revised goals have so far been met by most operators with others needing to complete additional work on wells to meet standards. Also effective in April are new rules designed to improve safety concerning gas and oil seperation, changes that are costly and can impact production.

As for oil prices time will tell whether the current prices will hold, I've read such a wide spectrum of opinions from industry analysts in recent months that it's impossible to see a consensus formed. We'll probably have a much clearer idea in three to four months at which point new production and exploration could be impacted but as we've seen over the last six months changes can happen almost overnight.

Discussions about the current barrel price 'damaging' domestic production are extremely premature with the number of active drilling rigs in North Dakota for example falling by only 5% during the second half of this year despite the drops in price. It's going to be a very interesting twelve months and we'll watch closely all developments here on the hot shot trucking blog.

We'd like to take this opportunity to wish you and yours a very healthy, prosperous and peaceful year ahead and we'll talk again next week.