Outside of the Northeast corridor and California no part of the nation sees as much heavy truck traffic as the upper Midwest particularly Michigan, Indiana and Illinois. If your journey has ever included greater Chicago you'll know that the highway infrastructure in Illinois is already stretched to its limits. For hot shot trucking and urgent freight avoiding delays is a critical component in customer satisfaction.

Therefore news from Illinois that significantly higher toll rates for trucks kicked in last week could be offset by the fact that increases from both trucks and passenger vehicles are designed to help pay for a giant multibillion-dollar expansion and reconstruction of the state's highway system which is seriously overdue. Beginning on January 1 truckers in the Land of Lincoln faced a 40% increase in tolls with further increases of 10% to follow in 2016 and 2017, after that time the Illinois State Toll Highway Authority (ISTHA) intends to index increases in line with inflation from 2018 onwards.

For trucking companies tolls are just a small portion of their overall operational costs but these fees can go a long way towards building a far more effective and competitive infrastructure within the state. The ISTHA has launched a $12 billion improvement and widening program set to run over a 15 year period. All efforts to improve journey times would be welcomed by any nationwide trucking company and it's this type of long-term investment that can help maintain the efficiency, safety and reliability of the trucking sector. To date more than $3 billion has been spent on a new interchange connecting the I-294 and I-57 southwest of Chicago and a major widening project for the I-90 between Rockford and Chicago. 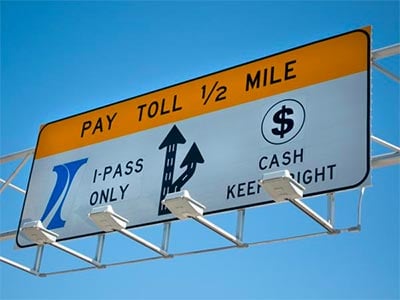 The ISTHA explained that the toll increase has been earmarked and shared with the industry since 2008 and that the benefits in terms of safety coupled with savings to the trucking sector in terms of fuel and time underpinned their investment. Trucks account for approximately 11% of all tolls collected statewide and will help fund expansion and construction plans that should see new record levels of highway development being completed in 2015.

"The time is more important than the (toll) money. The Tollway has a monopoly on the fastest way to travel in the suburbs. There is really no good option that's competitive in terms of travel time. The cost of moving goods … is not huge relative to cost of the products themselves"

While not every highway in Illinois is a toll road, on the sections that are it is estimated that truck rates will average 44 cents per mile a figure that is below the national average according to the Tollway,

Some resource information for this article courtesy of The Chicago Tribune.