Nationwide truckers who regularly travel across the state of Missouri on Interstate 70 may be facing tolls in the future. A study for the Missouri Department of Transportation has suggested that making the route a toll road is probably the best option for the state to enable it to make needed improvements to the highway.

The report was compiled at the request of Governor Jay Nixon and the Missouri Highways and Transportation Commission work outlines case studies to provide the needed expansion and improvements to I-70 for the future. The result is a very informative white paper about the need for tollingfrom the MoDOT. 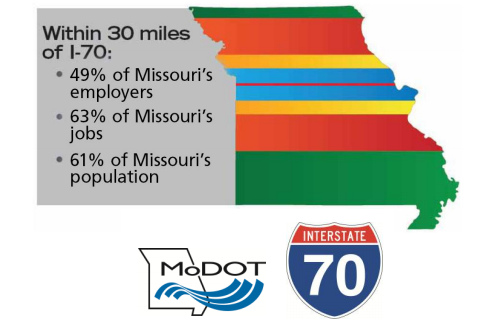 This section of I-70 is one of the older stretches of the interstate system in the nation with many sections dating back to the late 1950s which has resulted in a narrow median and what are today considered unsuitable exit and entrance ramps. The main focus of the report however is to study funding options to add additional lanes making the central portion of I-70 which runs from St. Louis to Kansas City either six or eight lanes.

Estimates today suggest that it will cost the state $2 billion to add a single lane in each direction across the length of the highway and more for widening the median. The initial findings propose that tolls for cars would be in the region of 10 to 15 cents per mile and trucks could expect to pay approximately twice as much, tolls for a truck traveling across the state could therefore be in the region of $40 to $60.

Opponents of the idea state that the tolls are much higher than those in other states but the MoDOT countered that with the following statement;

"Although many toll roads exist in the U.S., most were constructed during the 1940s through the 1970s and are not good comparisons to I-70 in Missouri."

For now the state of Missouri enters a waiting game to see what decisions are made and how soon construction and improvements will begin if they are approved. In the meantime I-70 continues to carry about double the number of vehicles it was designed for as the highway approaches its 60th anniversary.

We hope you enjoy your weekend and we'll be back next week with new hot shot trucking updates, we welcome your comments and suggestions, don't forget you can also follow us via Twitter, Facebook or LinkedIn for daily updates.

some source information for this article courtesy of KSDK.com