A proposal for a brand new extension to Interstate 27 in the oil country of Texas could be approved soon which will provide outstanding improved transportation options to the central part of the state heading north or south. The city of Big Spring voted unanimously to further a resolution backing the potential extension of Interstate 27 through the city, primarily along the current confines of Texas Highway 87. 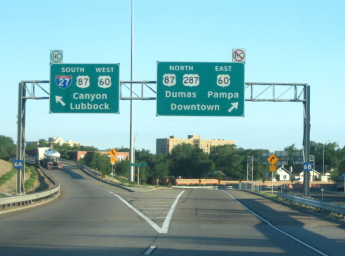 At present I-27 runs between Lubbock and Amarillo where it connect to the east/west I-40 connecting to the rest of the state and the region. An extension all the way south to Big Spring would see a further connection to I-20 allowing Big Spring, along with nearby Midland-Odessa to see the significant benefits of interstate options heading to each point of the compass.

Longer terms plan suggest the potential for I-27 to ultimately connect with the Mexican border or beyond. There are a number of alternate routes under review that could see different splinters with the long-term aim of I-27 becoming one of the major north-south transportation channels in the decades ahead.

The town's economic meeting inferred that in the distant future I-27 could be part of huge international trade route connecting Canada all the way down to southern Mexico. Transportation infrastructure spending is booming in Mexico and these improvements in central Texas could see the area become a vital crossroads for truck traffic nationwide.

The proposal is currently only at the early stages with the next step being a full feasibility study from the Texas Department of Transportation before the thorny topic of federal and state funding is even bridged. In truth, the entire project could be fifteen years or more from completion but it stands to make huge improvements to hot shot trucking services in the region for the future.