Good news for Hot Shot Trucking services and all interstate trucking companies as a critical interstate bridge in Indiana reopens after a month of closures. We previously wrote about the bridge on our sister blog at fulltruckload.com soon after the problems began in early August.

Interstate 65 between Lebanon and Lafayette Indiana had been closed since August 4th causing major disruptions to companies moving urgent freight through Indiana during that time, the cause was safety concerns over a highway bridge that spans Wildcat Creek just outside of Lafayette, IN. 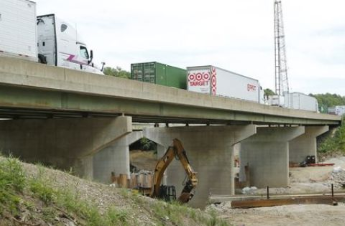 Repairs were finished and testing completed during the holiday weekend with the highway reopening on Sunday evening, the Indiana DOT were pleased that the repairs had been completed ahead of schedule due to round-the-clock efforts meaning that the closure was shorter than originally anticipated. The closure was due to improvements to the highway including widening the stretch of I-65 to six lanes saw the bridge sink over the creek.

Trucks and motorists were faced with a detour of more than fifty miles during the intervening five weeks impacting freight movement in that part of the state. Interstate 65 is heavily used by the trucking sector running southeast from Gary, IN through Indianapolis and then through to Kentucky, Tennessee and further beyond.