While the nationwide trucking industry was focusing on the now resolved West coast port dispute throughout the end of 2014 and during the opening months of 2015 a different but still important port issue is being faced on the opposite coast. The Port of New York and New Jersey ranks third in total tonnage nationally and set a new record cargo mark in 2014 but is struggling to manage increasing volume due to an over-stretched infrastructure. 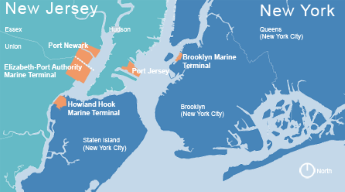 In 2014, The Port of New York and New Jersey handled 3,342,286 cargo containers, which marked 5.4 percent growth versus 2013. According to the Port Authority web site the value of all cargo that moved through the port was in excess of $200 billion.

The new year has commenced in a similar fashion with all time record cargo volume being handled in January and February of this year and no signs of there being a downturn. Against such a positive trend is a backdrop that could derail that momentum if concerns about the crumbling infrastructure of the ports aren't soon addressed.

A story by Steve Strunsky at NJ.com highlights the growing troubles with the road and rail networks that connect with the ports, terminals that are a vital part of the economy in that part of the nation. The ground transportation network is beginning to buckle due to age and serial lack of investment and Senate President Steve Sweeney feels these issues must be faced;

"If we don't have the infrastructure to move them, we are going to lose them to competing ports" (his comments referring to the more than 3.3 million containers handled by the port in 2014)

As ever, at the heart of the problem are debates over funding, none of which defers the reality that the investment must soon be made to keep the port as competitive and efficient as possible. In the mix are questions over whether that funding should be applied to road improvements or improving rail links and capacity for freight movement by train. Those arguments can surely be resolved after the critical decisions over funding are resolved, in the meantime the economic heartbeat of New York and New Jersey freight movement is being stretched to the limit.

Source information for this article courtesy of NJ.com