It's a pleasure to write about the final 2014 data concerning truck tonnage from the American Trucking Association that was just released. The new report shows that the seasonally adjusted For-Hire Truck Tonnage Index remained at 136.8, matching the November high water mark for 2014 which also happened to be an all time record.

The truck tonnage index was first introduced in 1973 by the American Trucking Association. The index is weighted proportionately to reflect the existing makeup of the trucking industry. At times like this it can be sobering to reflect on how the Truck Tonnage Index performed for the decade prior to the main graph on today's blog post, the data for 2004-2009 is above.

As the chart below clearly demonstrates the December numbers conclude a magnificent three year period for the index and indeed the nationwide trucking industry with growth being a consistent feature throughout that time. 2014 was particularly strong with the index either improving or remaining level for ten of the twelve months during the course of last year. 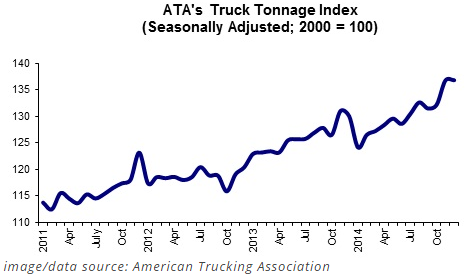 The final data reveals that the Index improved by a robust 3.5% year-over-year and that December showed the largest monthly gain over 2013 tonnage with a 5.2% increase. The economic indicators remained quite strong with manufacturing output increasing but a great month to end the year was curtailed somewhat with lower than expected retail sales.

Perhaps the most impressive figure is that the December data represents 10.2% growth from January of 2014 and signals that the trucking sector is in a very healthy position to begin 2015. With manufacturing set to grow and consumer confidence continuing to rebound U.S. GDP is expected to increase again this year to about 3.2% depending on which analysis you refer to. Steady if unspectacular economic expansion which should lead to stable improvement within the nationwide trucking sector.