In an effort to increase funding for state highway projects in Rhode Island, the introduction of tolling for trucks in the state for an extended period of time. Almost two years after the proposals were first introduced the Rhode Island Department of Transportation has now provided a comprehensive list of locations that are being considered for the addition of toll gantries.

Tolling is initially poised to impact the interstate trucking industry only, with tolls to be levied on commercial vehicles of class 8 or higher. 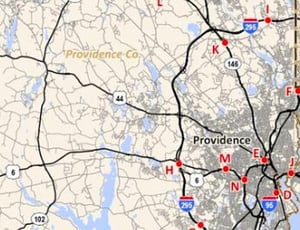 In total, fourteen individual locations are under consideration the vast majority of which reside on Interstate 95, the primary commercial freight route that bisects the state. In addition, three are proposed on I-295 and one on I-195. The state is seeking solutions to close funding gaps for urgently needed bridge repairs across Rhode Island.

The details of the study were provided in response to requests from state lawmakers to clarify the specifics of a tolling program should it come into existence. The importance to the local and regional economy is greatly dependent on the trucking sector and the dependable infrastructure so it will be interesting to see the next phase of these developments in Rhode Island.