The rapid decline in crude oil prices seen recently has led many observers to wave red flags about an impending massive reduction in domestic oil production, a sector that is greatly reliant on hot shot trucking services. However when reviewing recent data released by the U.S. Energy Information Administration (EIA) reports show that crude oil production in the United States is projected to grow during 2015.

These facts help to realign our understanding of the domestic energy sector and how the industry evolves is to some degree independent of where the current market price for a barrel of crude oil resides. The indicators from the EIA take into account long-range planning, forecasting and logistical considerations that represent the timespan of operational changes which far exceed in length the period in which oil costs have dropped (or increased) sharply,

The counterintuitive fact that domestic oil production is likely to rise this year is based on the fact that the majority of the projects that will be operational were proposed, approved, developed and financed far in advance of this January. For example permits for drilling take time to be secured and full production is preceded by the drilling of exploration and development wells. In addition very active fields such as those in North Dakota and Texas will see frequent rig movement from one approved location to the next. 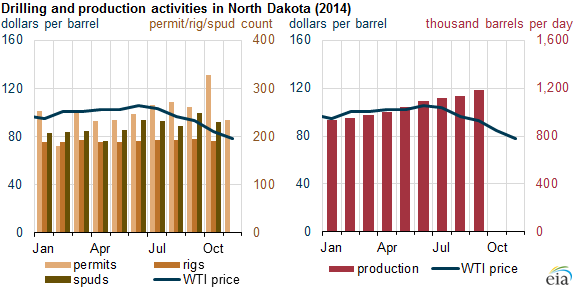 Such levels of advance planning dictate the development of the industry and in fact North Dakota's production in November had actually risen 5 % compared with the previous month. We may see greater fluctuation in the volume of drilling permits on a month-to-month basis but per the EIA those variables are not likely to impact overall oil production. It's also worth remembering that the last significant downturn in domestic oil production was against the backdrop of the nation being in the deepest recession seen in generations compared with today's fairly robust economy, a factor that also holds significance.

Overall the EIA anticipate some movement of investment from exploration and research with that money move towards existing mature production fields. According to the December forecasts they anticipate 9.3 million barrels per day to be produced in 2015 compared with 8.6 last year. Naturally these projections also hold the caveat of being extremely sensitive to actual pricing of crude throughout the upcoming months.

Some source information for this article courtesy of the U.S. Energy Information Administration.

As a part of the Expedited Group of Companies, at HotShotTrucking.com we fully understand the hot shot trucking industry as we specialize in the field every single day. You can rely on us to consistently provide;

HotShotTrucking.com was founded by Dan Boaz and is completely dedicated to your success and satisfaction. As your dependable and trusted Hot Shot Trucking company, we work daily to maintain unrivaled service and ensure on-time hot shot deliveries backed by our experts each and every time, locally, regionally or nationally.

We look forward to assisting you so please get started by calling 800-713-1000 or please complete our quick quote form for more information and if you have any questions we'll always be glad to help.